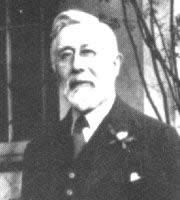 J. Ninian Comper was born in Aberdeen on 10th June 1884, the eldest of five children of the Revd John Comper and his wife Ellen. He was knighted in 1950 and died aged 96 on 22nd December 1960. His ashes are in Westminster Abbey.

The economic climate in which many of Comper’s church designs in the 1930s were commissioned frequently necessitated working to a very tight budget, but Comper’s sojourns in Italy and Spain had suggested to him the appropriateness of a more austere, simple style, and he responded to the influence of the plain, whitewashed Mediterranean architecture.

There are at least 13 churches in Scotland with Comper connections; these were often not designed by him but have his stained glass windows or furnishings; St Michael and All Angels, Inverness, in particular. Sadly, three other churches, mainly small, have been closed. His work in England was very extensive; among the best known are St Mary’s, Wellingborough, the Warriors’ Chapel in Westminster Abbey and St Philip’s, Cosham, Portsmouth. He also contributed work in the Cathedrals of Derby, Durham, Wakefield, Southwark and Suffolk, at several sites in London and in other places in different parts of England.